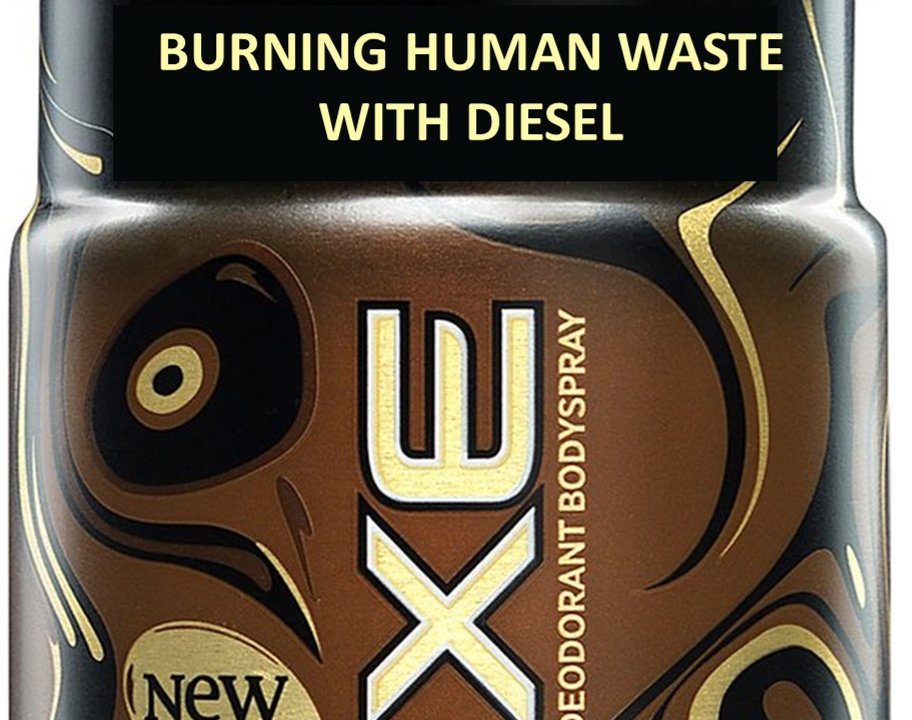 ENGLEWOOD CLIFFS, NJ – Taking a page from last year’s “Thank You For Your Service” line of military-themed scented novelty candles, world-famous men’s health company Axe Body Spray is kicking things up a notch this month by unveiling their new line of veteran-themed deodorant sprays as part of their #MarchTogether campaign.  Deodorant cans containing scents like “Bagram Burn Pit” and “Whiskey and Bad Decisions” are flying off the shelves at Post Exchanges world wide.

Former Yale University clinical researcher and current Axe Corporation “scentologist” Dr. Anosmia Olfactory explained: “As part of #MarchTogether, we wanted to do something to really support the troops. We know from market research that despite being less than 1% of the U.S. population, young enlisted members of the military make up 76.2% of Axe Body Spray consumers. Seriously, every young troop out there has like eight cans of the stuff. And because of Axe’s proven ability to attract members of the opposite sex, they’ll buy body spray before they buy toothpaste, car insurance, or even toilet paper. We just want to give back to the community who has given so much to us…I don’t think it’s too much to Axe.”

“Additionally, scent is the sense most closely tied to memories. What most veterans want to remember, more than anything else, is the smells from their time downrange,” Dr. Olfactory said in an exclusive interview with Article 107 News. “So, we asked a focus group of forty young Army soldiers in grades of E1-E4 to help us come up with names for the new military-themed line of body sprays, based on what they themselves remember from their brief military service.”

“Unfortunately, some of the things they came up with were a bit… inappropriate,” Dr. Olfactory continued. “No one is going to buy scents called “Fart Inside A Hot Pup Tent” or “Every Local National I’ve Ever Met” or “Port-O-Pottie Fornication,” that’s just gross.”

“They did come up with some excellent ideas, however. Our most popular scent in the new veteran-themed line, somewhat surprisingly, was “Burning Human Waste and Diesel.” This was the same scent that was such a hit in candle form last year. As it turns out, this particular smell most accurately described what veterans of any war remember most about their time downrange. We can’t keep it on our shelves!”

However, not everyone was impressed by the focus group selected by Axe executives. “Yeah, asking a bunch of Spec-Fours what smells they remember most about their time in the Army and you end up with scents like “Unadulterated Fear: The Hallway in Front of the Sergeant Major’s Office” or “Beer, Glitter and Syphilis: Killeen Edition” or “UCMJ: The Colonel’s Underage Daughter,” said First Sergeant Wade Wilson.

“What you need is something higher-end, for those of us who have gotten promoted out of the E-4 Mafia and have actually done something with our lives.” He went on to suggest scents like “High-Class Vegas Hooker,” “Desk Drawer Whiskey Bottle,” and “One Night in Bangkok: I Thought He Was a She.”

An officer-centric line including scents like “Brown Nose: Naked Career Ambition,” “Overpriced Scotch,” and “Cherries and Evergreen: New Lieutenant” are also reportedly in the works. Warrant officers couldn’t be bothered to participate in the focus groups so there is no custom Axe Body Spray line for them.

“Jody,” a scent based on a combination of equal parts “Cro-Dependa,” “Dance Club Bathroom Polo,” and “Your Bank Account,” surprisingly flopped with every focus group tested. “Too real,” was the chief complaint. Additionally, this particular scent caused any veterans within smelling distance, even those with successful marriages, to fly into a blind rage and summarily “monkey stomp” the wearer.

Other scents in the new veteran-themed line include:

Axe Body Spray tried to create a “VA Service” scent, but all of the veteran test subjects died during the wait to get the cap off of the damn thing.

Of course Axe Body Spray isn’t making a line of crappy smells veterans remember from their time in service. And thank goodness for that.