You are here: Home / Entertainment / General Mattis’s First Memo To the DoD Leaked To Article 107 News

Article 107 News received General James “Mad Dog” Mattis’s memo to the Department of Defense yesterday from an anonymous source.  Mattis will take over for SECDEF Carter upon Senate confirmation. The memo is not listed in it’s entirety; only its bullet points are shown.

-Everyone is going to read, at least a book a week. I better not see a tabloid magazine and a banana walking into the Pentagon. I expect to see something of intellectual value, like the Iliad or The Art of War. We’ve been fighting these wars for 15 years and we haven’t won yet. What the hell over? I’ve said this before: “Ultimately, a real understanding of history means that we face NOTHING new under the sun.”

-Haircut inspection in your respective Wings every Monday. I’m looking at you, Air Force. 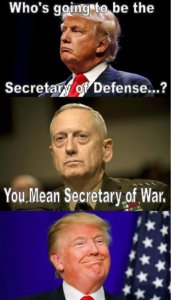 We’re going to rename the DoD…to the DoW!

-If you haven’t deployed to combat zones, you will. Commanders send a list of all non-deployed personnel to Arlene in the J-1.  As I said a decade ago, “It’s fun to shoot some people.”

-Speaking of shooting, we’re going back to basics. Rifle ranges quarterly. Anyone who shoots better than me gets a round of drinks on me. *Hint: you won’t shoot better than me, so good luck trying.

-Get rid of the PowerPoint briefings and start connecting with old school maps, paper, and butcher block. The D-Day letter was just that…a one-page letter with clear commander’s intent. Don’t give me this crap about a 300-page order with 150-page slide deck read-ahead. Powerpoint makes us stupid.

-I come to the DoD in peace. I didn’t bring artillery this time but again, if you fuck with me, I’ll kill you all.