You are here: Home / Military / General James Mattis Denied Re-Enlistment Because of Tattoos

General James “Mad Dog” Mattis was reportedly seen at Recruit Station San Diego trying to enlist in the Marine Corps to fight ISIS. The General showed up to the Recruit Station in jeans and a flannel shirt asking recruiters for an 0311 infantry contract. The Marines present did not recognize Mattis at first because of his thick bushy beard and heavily muscled physique. 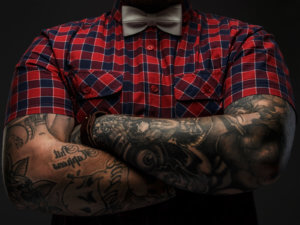 The recruiters initially balked at allowing a 66 year old man to enlist the Marine Corps until they were presented with an age waiver signed by every living Commandant of the Marine Corps except for General Amos.  The age waiver also had the signature of General Archibald Henderson and General Lewis “Chesty” Puller, allegedly dead since 1859 and 1971 respectively. General Mattis told recruiters that, “I’ve been to hell twice boys, in Nasariyah and Fallujah, and both times I saw those tough sons of bitches fighting alongside me. Didn’t see Amos though.  Weird.”

General Mattis was denied enlistment however, after he removed his shirt for a medical physical and revealed his brand new sleeve tattoos.  Current Marine Corps policy does not authorize the enlistment or re-enlistment of anyone with large tattoos on their arms or legs.  Mattis was incredulous that a woman or “one of them transgenders” could join the Marine Corps infantry but he could not because of his tattoos.

The General asked the recruiter, a young infantry Sergeant, if he could speak to his Staff NCO and request a waiver to policy. General Mattis’ ruse was discovered at this point when the Recruit Station Commanding Officer and SNCO, both personnel other than grunts (POGs), were physically unable to unlock their bodies from the position of attention in the General’s presence. General Mattis berated the officers in the Recruit Station for ruining his Corps and promised to build his own Marine Corps to fight ISIS. He is currently looking for barrel chested freedom fighters who can’t drill but like to drink, fight and f*** s**t up.