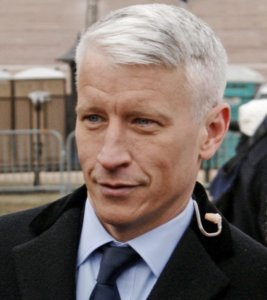 MIAMI, FL – Paramedics rushed to the vicinity of the Miami Hyatt Regency after an early-morning 911 call confirmed that CNN correspondent Anderson Cooper had overdosed on GOP debates. While the assembled candidates expressed dismay as the veteran reporter was transported to a nearby medical facility, no one seemed particularly surprised.

“It was pretty obvious that he had some sort of problem,” said Texas Senator Ted Cruz, one of the leading candidates for the Republican presidential nomination. “I have nothing against Cooper, other than him being a homosexual doomed to the fires of eternal damnation, but I pray he has a swift recovery. After all, he is one of dozens of Americans who still want to see more GOP debates.”

“I want to stay positive here folks,” Ohio Governor and eternal optimist John Kasich told reporters, sounding upbeat in spite of failing to win a single election thus far this year. “I think it’s great that a guy like Cooper was so excited to see this race continue and develop from a crowded field in January to a national embarrassment in February to the horrifying spectacle that it is now. And if somebody out there can’t get enough of politics, whether on the cable news shows or on Facebook and Twitter, well, maybe the government has an obligation to step in and help them.” 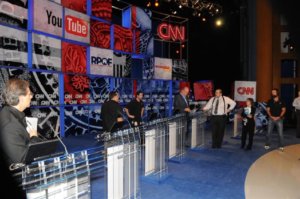 One of the scenes of these debates where political junkies go to get their fix.

“Obviously this news is deeply disturbing and our hearts go out to the Cooper family,” said Florida Senator Marco Rubio, appearing rattled and even sweatier than normal. “I mean, what a tragedy. If superficial good looks and an obsession with politics isn’t enough to keep you going in spite of a complete lack of credentials, what is?”

Of all the participants in this event, the 12th in a series of seemingly endless GOP debates, only New York businessman and improbable front-runner Donald Trump seemed unphased by the news.

Thanks to some timely mouth-to-mouth resuscitation by CNN colleague Wolf Blitzer, Cooper is expected to recover. The Center for Disease Control reports that roughly 1 out of every 100 Americans has watched all 12 of the GOP debates. If you know someone who has watched all 12 debates, please refer them to a doctor, as there is a 74% chance that person is an insufferable asshole.

Go ahead and talk about politics all you want. It makes you that much easier to unfollow on Facebook.