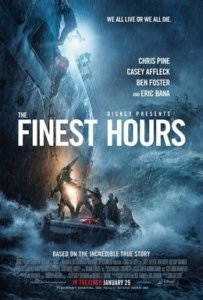 Man lemme tell you what, I dunno what other folks are thinkin’ but I loved the hell out of that new boat movie “The Finest Hours”. Now I woulda liked it a lot more if those SOCIALISTS at Regal Cinemas in Killeen had allowed me to take my Natty Lite tall boy into the theater, but apparently they hate FREEDOM.

So after having to pour out all our booze, everybody from the section settled in and we’re like shit, New England looks cold. Like that ice planet in Star Wars kinda cold. Makes me thank God that I’m from AMERICA and not some foreign place where everyone talks funny, though I gotta say their English accents were terrible.

But hey, they got that new Captain Kirk guy to be the hero! And hey, there’s Sergeant Ackerman from maintenance four rows down from us with some chick he peeled off the curb of Rancier Avenue. Like damn son, we just saw his wife at Wal-Mart when we were grabbing beer for the movie! Shit’s gettin’ real exciting now, cuz Ackerman’s got his tongue so far down this lady’s throat he can probably taste what she ate for breakfast, when once again those COMMUNISTS at Regal Cinemas come and are all “Excuse me gentlemen but you can’t record the movie on your phones or I’ll have to ask you leave,” and we’re like “Dang son we ain’t even watching the movie we’re trying to get dirt on maintenance platoon” when Ackerman comes up the aisle yelling “I’m gonna kill you little shits” and we all run out the back of the theater.

So maybe we got to see like, 20 minutes of the movie, but it looked pretty good from what I saw.